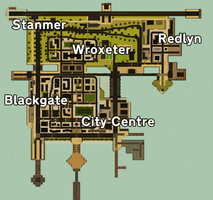 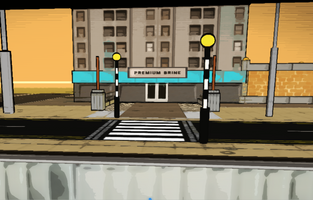 Pavilion City isn’t really a city. It just likes to call itself one.

For some, this seaside town is a bohemian paradise. For others, a retched pit of filth and desperation; plagued by vice and gang violence.

Stanmer:
Linked to Blackgate by Stanmer bridge, along the A47, this is the north-western area covered largely by forests. Mayor Wanderstock resides here, at the grand Casa De Maravilla. The Metro Viaduct line also runs along the northern edge of town, towards Wroxeter. At the western most end of the Viaduct line, there is a large small dock often guarded by Guerrillas.

There is also a Blink Respray garage, as well as three other vehicle businesses located here. An ideal spot for those who trade with motors.

Wroxeter:
Wroxeter was a somewhat featureless place or ‘crap town’ that is now being assimilated into the rest of Pavilion City with recent developments. There is a large shopping centre, the Wroxeter Arcade, that features shops doing great deals on painkillers and body armour.

The village elders can all be found at the Naked Bishop pub, telling each other racist jokes and getting shitfaced. It’s not currently known how this shady establishment is allowed to trade liquor.

Wroxeter also features a pawn shop, a newsagent and a church. Residents in the workforce are almost all employed by OnWeb, whose huge call centre is training everyone on becoming narcissistic sales agents.

Redlyn:
The dankest part of town, on the ‘wrong’ side of the A47 East. Features a large industrial complex, factories and dockyards. Most of the industry now lies disused and abandoned like most other British manufacturing. There is a heavy military presence as per the army base in northern Redlyn which holds tanks and artillery.

Beach Corp Records, a struggling record label, have their offices in Redlyn. With the right business model and creative thinking, perhaps they can stop haemorrhaging money and start producing good music again!

At the south of Redlyn, there is Lotus – formally known as ‘Lotus Island’ before the island was eaten into dockland by Redlyn. It serves as a marina and garden featuring the famous Lotus lighthouse. Lotus also terminates the Metro Lotus line at the eastern side.

Blackgate:
If you’re heading along the A47 west and you’re trying to escape Pavilion City, you have to head through Blackgate first.

It’s unclear where Blackgate starts or stops, and nobody really cares any more. This part of town is seemingly made up of overpriced car parks, concrete tower blocks and seedy hotels. The central Pavilion City Metro station is allegedly part of northern Blackgate. Don’t try and spend the night here.

Regency architecture is slowly being torn down and replaced by concrete and wider roads. Vegan dog food, parsnip flutes, tie die clothing and additive free tobacco is sold in the marketplace. Nothing is sold at a fair price.

Clubbing is a massive scene in Pavilion City, where the two dominant clubs are Entropy and Snowcloud.

The primary medical facility in Pavilion City is the Royal Vauxhall Hospital. Resources are stretched to the limit, particularly with local gang violence bringing in extra patients.

There are two large piers along the south coast. The west pier or ‘Ghost Pier’ is currently closed to the public as it has been deemed unsafe. The Angel pier isn’t any safer, but if it closes too then the city’s economy will collapse.

There is also a sandy beach between the piers, allowing a taste of summer paradise. However, the seawater around Pavilion City has an alarmingly low pH level, a complete mystery to local scientists, but a surefire sign to not go diving.